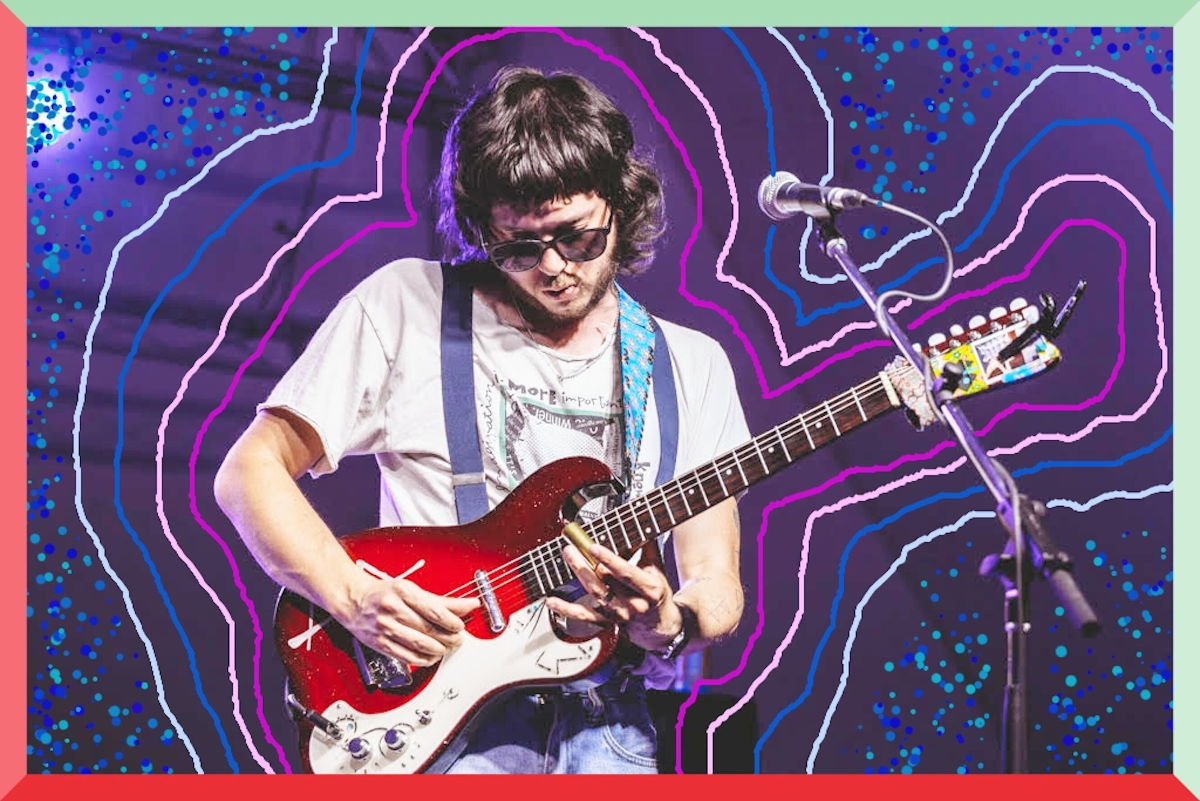 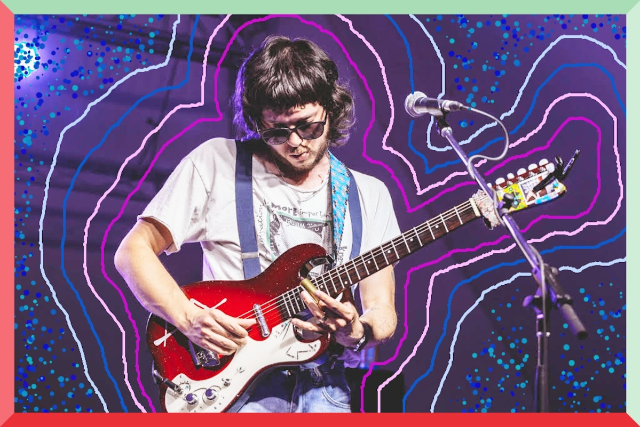 
Following the Mystic Valley Band’s recent reunion shows and a cover of his 2013 song “Dominos” on the
critically acclaimed Better Oblivion Community Center album, Taylor Hollingsworth’s new LP Tap Dancin’
Daddy is out August 2, 2019 on the Los Angeles based Flower Moon Records. TDD is his first solo release
under his own name since 2011, and coincides with his West Coast run with Better Oblivion Community Center
this August. Pre-order bundles (available now) include a limited run 7” single on colored vinyl, tour exclusive
cassettes, and (for those that are familiar with Taylor’s on stage mannerisms) limited edition bobble heads.

Hollingsworth’s solo recordings date back to 2003, ranging from weird lo-fi blues-pop (2003's You Know
That Summers Comin’ and 2011’s Where to Go, How to Get There and What You Should Know in
Advance), to whiplash-shredding, 70’s-era sing-alongs (2005’s Tragic City), to flawlessly-fingerpicked-
acoustic avalanche-of-tear ballads (2009’s Life With a Slow Ear). In 2007, Hollingsworth ended up in
Tepoztlan, Mexico to work with Conor Oberst on what would become Conor’s self-titled solo debut.
Taylor contributed several original songs to Conor Oberst and the Mystic Valley Band’s (COMVB) 2009
Outer South including “Air Mattress” and “Snake Hill,” and “Central City” on 2012’s One of My Kind.
Hollingsworth and his wife Kate released two records as Dead Fingers (recorded by Bruce Watson and
released on Fat Possum records) and he’s has also recorded and/or toured with Maria Taylor, The Felice
Brothers, The Dexateens, Monsieur Jeffrey Evans, Jack Oblivion, SDX and more.
Ten years on the road culminated with the Tecate-blur of a never-ending world tour with the Mystic
Valley Band. When it was over, Hollingsworth went back home to Birmingham, Alabama to start a family,
buy a home, and play local gigs around town to make ends meet. This is where Taylor rediscovered what
truly made him happy was just the simple creation of art and songs – free of striving for “success.” He
found comfort in the old school punk-rock DIY ethos and studied the minimalist folk & blues players who
mastered playing to small rooms for the sole purpose of entertainment. Hollingsworth evolved his faster-
than-hell-fuzzed-out style to be more folk-blues inspired finger-picking, preferring just a duo (guitar and
drum) and incorporating a loop guitar pedal to keep the party atmosphere going late nights at local
gigs. “I loved how the old blues guys used to be the house band somewhere, and they'd just play all the
time, and go all night long. You can really get lost in the music that way.” It became even more fulfilling,
plus it paid the bills and he got to sleep in his own bed every night. Tap Dancin’ Daddy was recorded and
produced by Taylor in his humble wood-paneled basement studio in Alabama full of old gear he’s
collected over the years and decorated with his weird and eclectic art. He still plays regularly in
Birmingham at Marty's PM, Little Italy, and Parkside, and you can often find him happily busking on
downtown sidewalks for tips at local farmers markets, events, or parties. 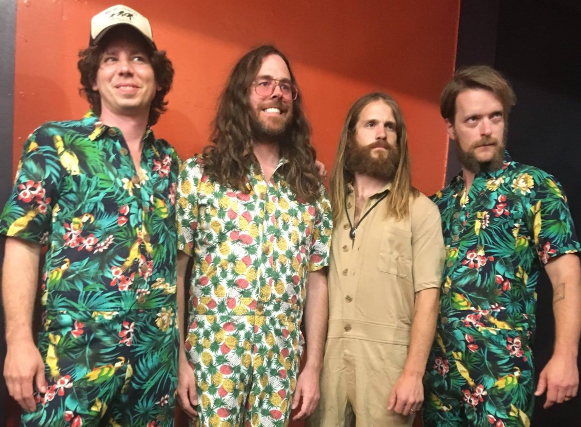 Austin’s Lonesome Heroes reside at the cosmic junction of indie rock and country. Led by frontman Rich Russell’s never-ending call of the road, the group have toured extensively behind two acclaimed albums across continents on both sides of the world, while never straying too far from their “Cosmic Americana” roots.

An ethereal reverence for the troubadour spirit is evident in stand out tracks “Western Style Saloons” - an homage to small town dance halls featured on the final season of Netflix’s Bloodline - and the linking of asphalt, mind and body in “Steel” - named KCRW’s Top Tune Download of the Day. Both appear on 2015’s Can’t Stand Still, which became more of a state of being than a sophomore album for the Heroes as the number of shows across the U.S. paired with an Australian tour turned into 100+ dates. Can’t Stand Still was praised at home by the Austin Chronicle as one of 2015’s best albums, featured abroad in Rolling Stone Australia, and received airplay on radio stations throughout the U.S., Europe and Australia.

With a new album on the horizon, Lonesome Heroes are picking up where Can’t Stand Still left off, not only returning to Jim Eno’s (Spoon) Public Hi-Fi but continually deriving inspiration from the miles put behind. An early single from the forthcoming album Rise & Fall, the co-written “Hope” adds Russell’s geography to the wistful hook of songwriter Ron Scott (Gregory Alan Isakov, J Wagner), offering a dreamy look to the material ahead.

As the finishing touches are made on Rise & Fall, The Lonesome Heroes are looking to spend their post-SXSW 2019 touring and topping last summer's run of festival appearances at the inaugural Bastrop Music Festival outside of Austin, Wyoming’s WHAT FEST, playing alongside Dwight Yoakam and past Australian tour-mate Ruby Boots at their debut Red Ants Pants Music Festival in Montana, and on the Oregon Coast for Electric Fences as part of a line up including Calvin Johnson (K Records) and Austin friends Leo Rondeau and Little Mazarn.

Brooklyn-raised Russell formed The Lonesome Heroes in 2006 after relocating to Austin. The release of 2012’s Daydream Western won that year's Vox Pop award at the Independent Music Awards, with the single “Something Reckless” featured on ABC’s Nashville in 2013. Described by KUTX as “the soundscape that occurs when indie rock and country artfully cross paths,” The Lonesome Heroes have played over 1000 shows, turning indie-rockers into two-steppers (or vice-versa) by way of the rhythm of the road. 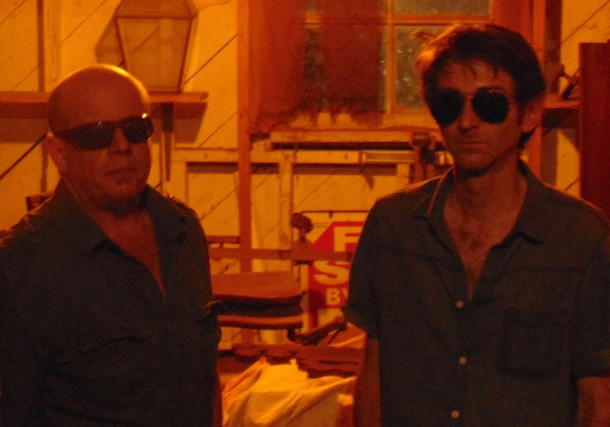 Dark Southern Folk from Clarksdale MS
A dark and moody folk rock/americana duo from the Deep South. Doom and gloom and all that good shit we all live for...
A dark and moody Americana duo from the Deep South with original sounds inspired by the likes of A.A. Bondy and the Velvet Underground and lyrics that bring to mind early Bob Dylan. After his 2009 solo release "Losing Kind, Losing One" (Avebury Records DL14014) Sitton took a hiatus from the music scene, but is back with a new project. The lineup includes J.H. Sitton on guitar and vocals with Doug Bales (from Mark 'Porkchop' Holder, James Leg and Uncle Lightnin') on drums. This powerful duo is currently working on a new album to be released in late 2019. Stay tuned...